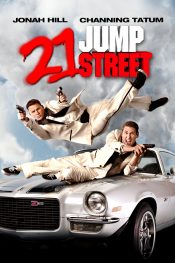 The 2012 edition of ’21 Jump Street’ starring Jonah Hill, Channing Tatum, and Ice Cube was filmed in the beautiful city of New Orleans, Louisiana; including surrounding cities such as Jefferson and Metairie.

Filming Locations show
Where were the classic bike patrol scenes filmed?
What about the High School seen in the movie?
Where is the Clandestine police HQ?
Where can the “City Mall” be found?
Youtube Trailer:
Watch now on iTunes:

The duo teams up for the first time in this cult-classic comedy where the two police officers are told to be undercover so they can fight a crime-ridden high school. The Sagan High School used in the film is actually located in Jefferson, Louisiana and is called Riverdale High School in real life. The police headquarters used in the film called The Clandestine Police HQ was actually filmed inside the St. Historic St. James AME Church located in New Orleans at the address 222 N Roman St, New Orleans, Louisiana.

Where were the classic bike patrol scenes filmed?

What about the High School seen in the movie?

Where is the Clandestine police HQ?

Where can the “City Mall” be found?

The Esplanade Mall in Kenner, Louisiana

Before there was technology and the intelligence we now know, cops had to act like students (AKA narcs) in school. They would pick younger-looking officers and dress them up in highschool gear, give them a name, a story, and an identity. That’s where 21 Jump Street jumps in. When Johah Hill and Channing Tatum were kids, they were always going to be life-long friends. Even if they didn’t know it yet. The two of them are now police officers and not great ones. So they are assigned to 21 Jump Street to find out where the infestation of narcotics have entered the scene. Let the story continue as you watch it.