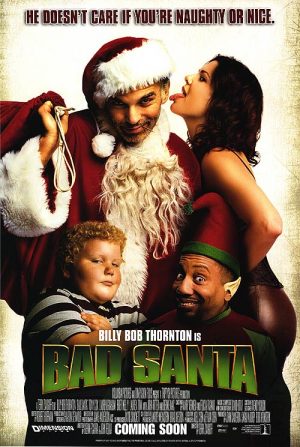 The 2003 Christmas movie Bad Santa, starring Billy Bob Thornton & Bernie Mac, was mainly filmed in Southern California in cities such as Long Beach, Venice Beach, Monrovia, West Hills, and the San Fernando Valley, where many films are made because of the numerous movie studios and of course the great weather.

Filming Locations show
Willie’s Apartment
Where is the Kid’s house?
Where is the O’Hara’s Pub seen in the film?

For example, have you ever wondered where O’Hara’s Pub is? Or the The Motel where Willie stays at? We have gathered many of the important locations used for Bad Santa for you to explore the next time you travel to Los Angeles.

The apartment that Willie lives is actually located in Long Beach, California on Magnolia Ave.

Where is the Kid’s house?

Where is the O’Hara’s Pub seen in the film?

“The Bar Where Sue Worked”

“The Motel is the famous “El Capitan Motor Inn”

Thank you “jimh” for the tips!