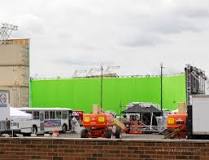 East of Plano, the Kent family farm was built on the south side of East Schoolhouse Road, just east of Fairway Drive, between Yorkville and Plainfield

Thank you ‘Rita’ for the Tip! Thank you “kimG” for the pic!

The Scene where Lois Lane is saved by Superman, after Lex pushes her off the helipad at the Richard J. Daley Center