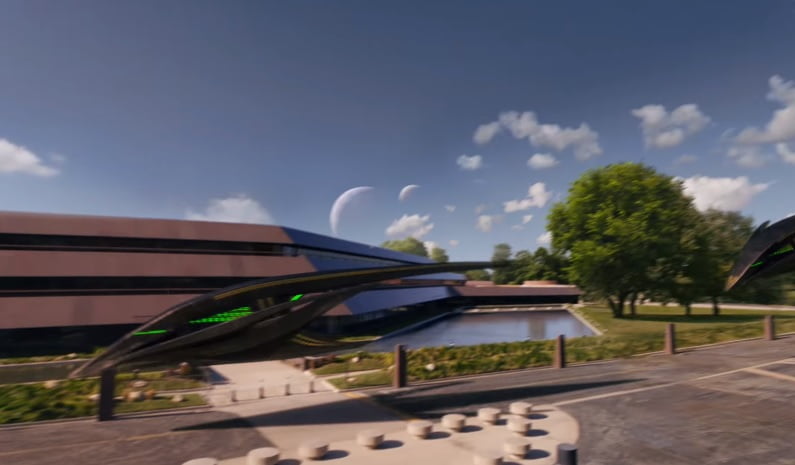 Where is The Orville filmed?

Filming Locations show
Where is The Orville filmed?
Is the Orville a real spacecraft?
What about the scene where they land on earth?
Watch Now on iTunes:

The new FOX series “The Orville” starring Seth MacFarlane & Adrianne Palicki is filmed on location mainly in Los Angeles and Westlake Village, CA. Most of the show is done in a studio as you may have guessed by the looks of the “space” part of the show. Mainly, the show is filmed at Universal Studios Hollywood as well as the The Planetary Union HQ located in Westlake Village (a small city tucked away just North-west of Los Angeles).

Is the Orville a real spacecraft?

Yes, the Orville ECV 197-1 is real and was spotted recently flying down the 134 freeway in Los Angeles, California Thank you “theantnest” for the pic!

The Orville’s filming location takes place in outer space as the trailers and show suggests, however wouldn’t it be interesting to know where it was actually filmed? In outer space! No just kidding. The Orville is actually being filmed in Westlake Village, CA and other locations nearby in various studios. We would love for a show to actually take place in Space but we’re a little bit too early in civilization for that.

What about the scene where they land on earth?

Some of the scenes done in the show are actually being done at Universal Studios Hollywood as well as The Planetary Union HQ located at 1 Baxter Way, Westlake Village. Most scenes are done with CGI otherwise known as a “green screen” so knowing where the studio is is important as well. Visit this location at 1 Baxter Way, Westlake Village, CA 91362 HOLLYWOOD – May 2017: Seth MacFarlane’s new space-comedy is currently filming on location on a Universal Studios Sound Stage in Hollywood

Thank you “FTbeyonce” for the tip!