The ship in which Chris Pratt & Jennifer Lawrence board for their journey to a new planet. | Images courtesy of Sony Pictures

The space-adventure movie ‘Passengers’ starring Jennifer Lawrence & Chris Pratt was filmed at a studio located in Georgia. Most of the film takes place on a galactic ship that embarks on a 120 year journey to a new world. Something goes wrong on the ship and so Jim (Pratt) and Aurora (Lawrence) find themselves awake 90 years too early.

According to the casting call by Tammy Smith Casting, the movie was filmed in Fayetteville, GA and in the greater Georgia area. Specifically, the star-studded feature was mainly filmed at the Pinewood Atlanta Studios located on 461 Sandy Creek Rd, Fayetteville, GA 30214.

Here is the studio where the majority of ‘Passengers’ was filmed at. This studio has filmed many other movies in the past and we expect many more in the future. (Thanks “rachel”!) 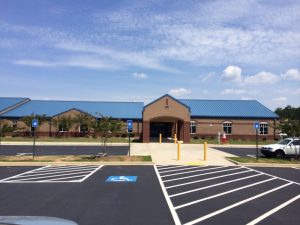 Because a huge majority of the film takes place on a spaceship, we have come to the conclusion that the movie was shot exclusively in and around the film studio located in Atlanta, Georgia. This has become a common occurance where movies are filmed in a single location rather than various spots due to the rise of technologies such as the green screen and CGI.

Cast of the movie:

Do you know of any additional filming locations?