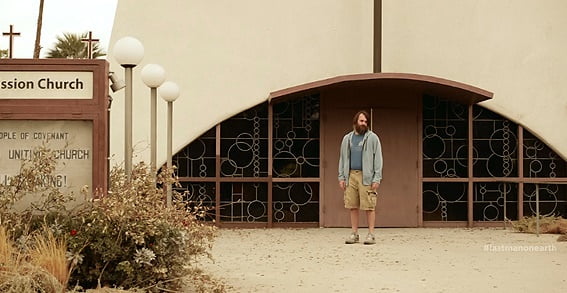 Carol breaks into the “Craftworks” to get supplies for the wedding Phil, A Fire Shooter, and a Toilet Paper Tower Phil falls in love with a mannequin in the window The Church were Phil & Carol get married “Carol drives away from the Church, mad at Phil” The Jewelry store where Phil and Carol “buy” their wedding Rings Phil and Carol meet a new human named “Melissa” by crashing into each other in Santa Paula, CA The last 2 people on earth, “Phil & Carol” decide to get married. Some friggin blond named “Melissa” shows up & changes everything.

The hit TV Show “The Last Man on Earth” takes place in the future after a virus has destroyed and killed off most of the population. Instead of zombies, however, there is only Phil. Phil is the last man on earth, or so he thinks. In this episode you will find tons of great comedic value as Phil and Carol are getting married. The reason they are getting married is so Carol will finally start repopulating the world by having a child with Phil. This gets intense as they plan out the entire wedding and even how they’re going to do it. It’s a great episode with filming locations all over Chatsworth, California. If you are a true fan of the show and you live near the Valley then these locations are awesome for you.