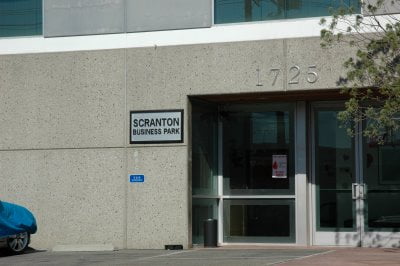 Where is Dunder Mifflin located?

The Scranton Business Park that holds Dunder Mifflin can be found in Van Nuys on Saticoy Street.

Larry’s Chili Dog is where Michael Scott tries to barter his watch for a hot dog.

The Search (episode 7.15) “On The Roof of The Mayfair Hotel”

3The Office TV production sighting: 03/04/2013: Loads of production trailers were spotted on the set of NBC’s hit series “The Office”. Pierce College’s Equestrian Center in Woodland Hills, California was used for an upcoming episode.

“The Negotation” Season 3, Episode 19 scenes were filmed at the The Hungry Fox