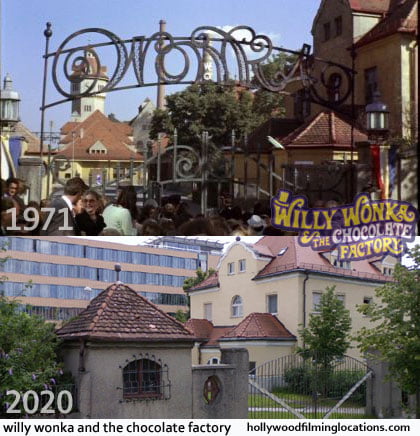 Where was Willy Wonka filmed?

Have you ever wondered where Willy Wonka and The Chocolate Factory was filmed? Thanks to some recent tips from our dedicated users, we now know that Munich, Germany was where most of the filming took place, with only the opening scenes being shot in Switzerland.

The first stop on the tour is Charlie’s School seen in the film.

Most of the school scenes were done at Kath. Pfarramt St. Sylvester, Biedersteiner Straße 1 in Munich.

Unfortunatly The building used in the movie was torn down and replaced with a new one.

Where is Charlie’s house seen in the film?

The little shack that the family lived in was located on Quellenstraße, Munich, Germany

Where is Willy Wonka’s Chocolate Factory?

The Munich City Utilities or SWM, a German communal company was the stand-in location for the Wonka factory. A few small sets were created at the entrance including the small Will Wonka entrance.

The main entrance is still there today and looks mostly the same including the 2 large buildings that are on both sides of the walkway.

In this scene, Charlie is walking by a smaller gate that is located next to the main gate entrance.

Charlie notices a silver coin in a drain located on Lilienstraße, Munich

Below is a great video of Willy Wonka filming location sent in by: Nick P Was Here

‘Willy Wonka and the Chocolate Factory’