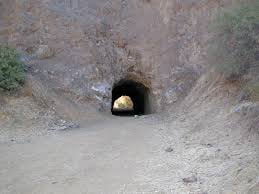 The famous Bronson Caves aka “The Bat Cave” are located in Griffith Park, Los Angeles, California

Many classic movies and TV series have been filmed the Bronson Caves. The most famous being “Batman” the TV series made this spot the place a must-see when you’re in Los Angeles Here are just some of the production that were filmed at this awesome cave:

‘The Bat Cave aka Bronson Caves’