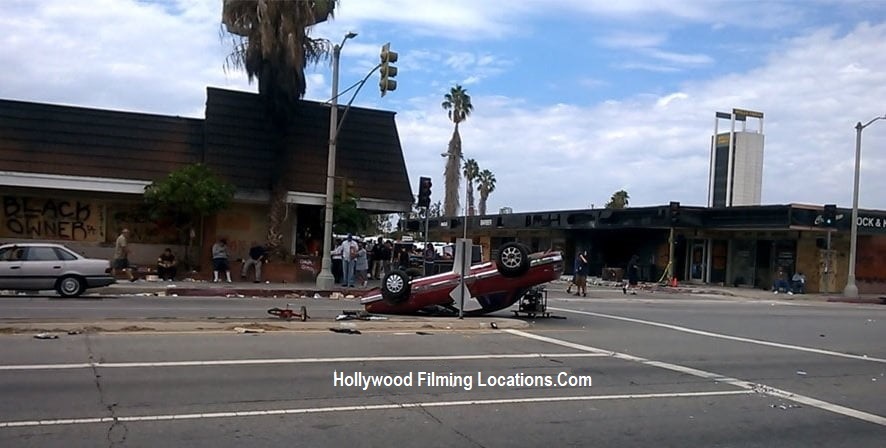 With it’s huge rise in success, NWA has successfully made it with the hit movie Straight Outta Compton. The movie was filmed all over Los Angeles including the San Fernando Valley and North Hollywood. Starring in this movie is a wide range of new and upcoming actors and actresses such as O’Shea Jackson, Jr. playing as the famous Ice Cube. Corey Hawkins plays the wildly successful Producer Dr. Dre. And Jason Mitchell stars as Eazy-E. Paul Giamatti as the manager Jerry Heller, whose managing skills are said to have put Eazy-E outta business.

Check out this awesome behind the scenes footage of Straight Outta Compton.

First stop on the Straight Outta Compton tour is the LA Riots scene. If it looks familiar that’s because it was filmed around the old Valley Plaza located in North Hollywood, California.

Fun Film Facts: Many movies & TV shows have been filmed at the Valley Plaza in North Hollywood including Straight Outta Compton, Aquarius, Pineapple Express, The Middle, Supergirl, Suburicon and more

Location # 2 on the tour is Skateland USA in Compton, California. The actual Skateland in Compton had been closed for many years by the time production had started on the movie. And since it was gutted and and vertually condemed, filming had to be done in Glendale, California.

This was the actual location of N.W.A’s first official show. Originally a bowling alley before being turned into a skating rink and music venue. Some of the most famous rappers of all time started here. Visit offthamap.wordpress.com for some good info on this historic building.

Since the actual Skateland USA was no longer available for shooting, the production team went about 20 miles north to use The Moonlight Rollerway in Glendale, California.

Fun Film Fact: This is the actual club Dr. Dre and Ice Cube first performed at.

Location #4 Is the World Famous Los Angeles Memorial Sports Arena located on Figueroa. The arena was used to recreate a large concert scene

Location #5 is the school seen below. Location is unknown – Got a Tip?

Do you know of a filming location? Click Here! or email us

Straight Outta Compton is a bio-drama film about the rise and fall of the LA hip hop group N.W.A. The film borrows its title from the name of the groups debut album. Straight Outta Compton stars O’Shea Jackson, Jr. as Ice Cube, Corey Hawkins as Dr. Dre, Jason Mitchell as Eazy-E, and Paul Giamatti as the manager Jerry Heller. Among the film’s Producers are Ice Cube, Dr. Dre, and Eazy-E‍ ’s widow, Tomica Woods-Wright, with MC Ren and DJ Yella