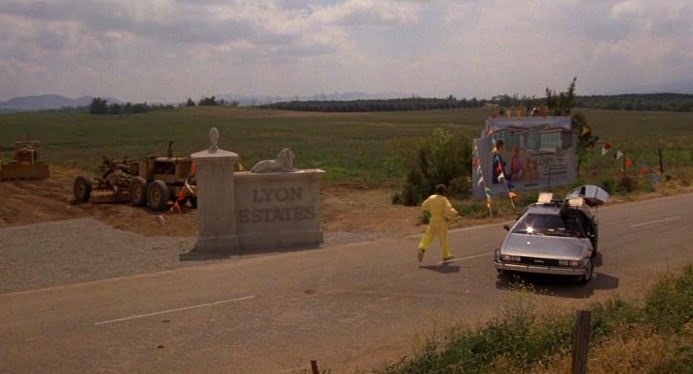 Have you ever wondered where was the Back To The Future movie filmed? The answer is the San Fernando Valley in Pacoima. Other secret locations include, Hollywood, Puente Hills, Burbank, and Pasadena, California. Many of the iconic location still exist today.

In order of popularity, take the tour of the most iconic location known to still exist. with the help of google street view of course.

First location is the mall.

Most people ask us “where’s the Twin Pines Mall featured in the film”? The answer is the “The Puente Hills Mall” parking lot located in the City of Industry. In the film, Marty has to jump into an 1981 DeLorean Time Machine and quickly race it up to 88mph to avoid being caught by the bad guys.

This link is the exact spot / location where Marty and the Delorean go Back in Time to 1955. Map It 1!!

Second location is the Lyon Estates Entrance in 1985. The entrance, minus the Lyons, can be found in San Fernando Valley in Pacoima, California.

Where was the Lyon Estates Entrance in 1955? On a dirt road located in Chino California.

The forth location on the tour is the McFly residence in 1985. The iconic single family ranch style home can also be found in Pacoima on Roslyndale Ave.

Where’s Doc’s Garage and The Burger King Marty rides his seen in 1985?

Docs garage located at 1646 Victory Boulevard was an exterior façade aka a set that was built in the Burger King parking lot and then destroyed shortly after filming wrapped up.

Where can Hill Valley High School be found? The real school used was Whittier High School located at 12417 Philadelphia Street in Whittier, California

The Battle of The Bands Audition scenes were not filmed at Whittier High School. This classic scene was shot at the McCambridge Rec Center located at 1515 N Glenoaks Blvd, Burbank, CA

The starting point for Marty to get home location can actually be found in Griffith Park at 2700 N. Vermont Avenue, Los Angeles A young George Mcfly is caught by Marty using binoculars looking into Lorraine’s house. This awesome scene was filmed in front of the 1955 “McFly residence” located on Bushnell. The tree is still there today. The Biff Tannen residence in 1955 Enchantment Under The Sea Dance scenes were filmed inside the gymnasium at The Hollywood United Methodist Church. Located just blocks from the Chinese Theater on Hollywood Blvd 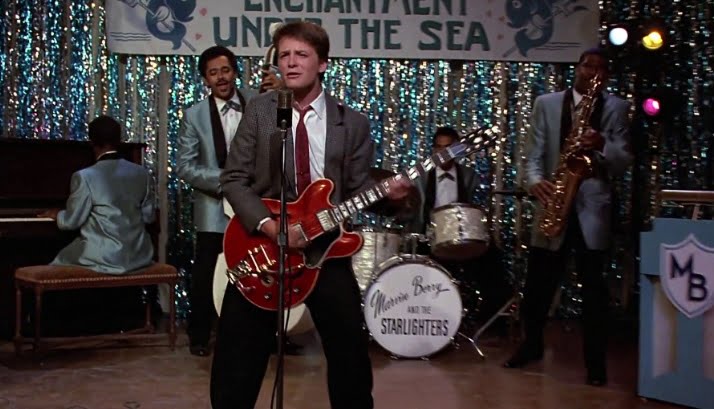 SEE ALL BEHIND THE SCENES PICTURES >>

Back To The Future Part 2 Filming Locations

Back To The Future Part 3 Filming Locations

‘Back To The Future’

This is that movie where some guy drives a 1980’s delorean into the past.