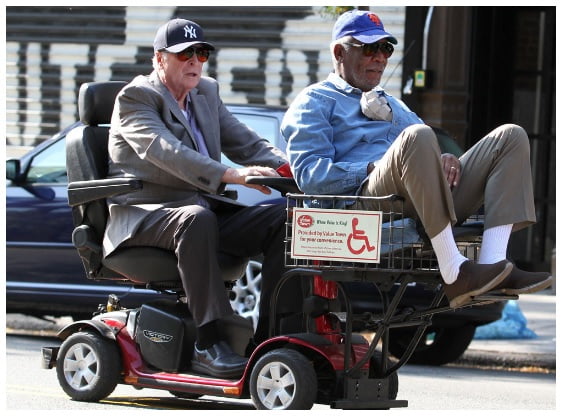 Going in Style, a movie starring Morgan Freeman, Michael Caine and Alan Arkin, was spotted filming all around New York. As the three team up as the characters Willie, Joe and Al, they embark on an adventure to circumvent retirement and instead try to get their money from the same bank that took most of their money in the first place.

In May, 2016, many photos from fans were taken of Morgan Freeman & Michael Caine cruising around on a wheel-chair in New York for the upcoming movie.

May, 2016 – Morgan Freeman & Michael Caine were spotted cruising around on a power wheel-chair in New York for the filming of a remake of the 1979 classic “Going In Style”

05/05/2016 – Some carnival scenes were being shot in Brooklyn today. Security tells us that the movie was Going in Style?

Thank you “denny & Bette” for the tip!

04/20/2016 – Filming for Going in Style is being done at the Goodfellas Diner aka Clinton Diner in Maspeth, Queens, New York Thank you “PaulJ” for the tip!

Where is Value Town located?