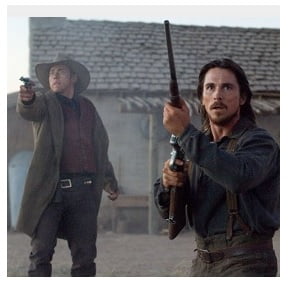 In this shooting scene, Christian Bale and his partner are combat-ready to overcome any enemy in sight. | Images courtesy of Entertainment Studios

Critics are calling this “One of the best western movies ever made” and Christian Bale has once again shown he’s a very capable, talented actor.

Other stars in this movie are Rosamund Pike, Wes Studi, Jesse Plemons, and many more. Directed by Scott Cooper, the film was released on December 22nd, 2017 and is based on a story by Donald E. Stewart.

The Black Jack Group Campground in Clifton Arizona was the main location used for most of the exterior scenes.