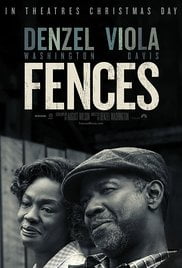 “Fences” was filmed on location in Pittsburgh, Pennsylvania