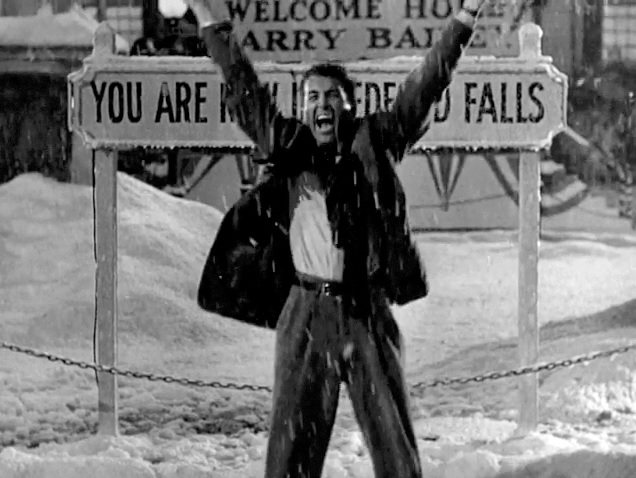 We’re very sorry to have to be the ones to tell you that the town of Bedford Falls is not located in a magical upstate New York town as the movie has you to believe. It was in fact, filmed at the RKO Encino Ranch that “was” located in the desert of the San Fernando Valley, Los Angeles California.

I’ve lived my whole life living in the Valley and never knew that the town of Bedford Falls, you know, the town featured in one the most famous most watched Christmas movies of all time, was actually in my own backyard (well, not literally).

According to Harriett, a fan of hollywood-filming-locations, the movie was filmed in 1946 during a very hot, 100+ degree summer.

She told us that the approximate location of the town of Bedford Falls is located somewhere about Babbitt Avenue in Encino, California. Some people think that the Soccer fields next-door is the actual location, but that’s just not true.

Unfortunately, all the building sets, houses, and the actual town of Bedford Falls is now just a part of Encino Village, one of the first suburbs in Los Angeles.

How many people throughout the years, have had no idea they’re actually living on the exact location where their favorite Christmas movie was filmed almost 90 years ago?

Louise Avenue cuts right through the old RKO Studio. With Balboa to the right (west), Burbank at the bottom (south), and the LA River to the North. Click here to view on google earth.

Got a Tip or Suggestion? Where do you think the exact location of Bedford Falls is?

Do you have any stories regarding the filming of It’s A Wonderful Life? Click Here and tell us about it

Where is George Bailey and Mary Hatch’s house seen in It’s A Wonderful Life?

At 20 Sycamore Street Bedford Falls, NY is the actual street address of the Bailey family and you could of found this amazing house inside the RKO Encino Ranch on New England Street.

The Bedford Falls set took two months to build, and, was at the time, one of the largest sets ever created for a movie. The neighborhood and town took up around 3 square blocks of the 4 acre ranch.

It’s estimated that more than 75 stores and buildings were constructed as well as many full-grown oak trees were transplanted here in the desert of Encino to make it look as real as possible. Some say that some Oaks still exits in random spots in the neighborhood.

Portions of the actual RKO studios remain today if you know where to look.

Fun film fact: Many incredible films were filmed at RKO including: Hunchback of Notre Dame (1939)

Where can the real Bedford Falls be found?

The inspiration for the movie can be found on Fall Street in the very small town Seneca Falls in New York. The annual “It’s a Wonderful Life festival” is held there every December.

Fortunately, there are a few locations you can still visit today.

The first location is the The Charleston Dance Contest Pool. A 75-foot pool under a retractable gym floor.Remember the moving gymnasium floor over the hidden swimming pool? Believe it or not, this is a real pool and of course it’s located in Beverly Hills, inside the Beverly Hills High School. Yes, this is the same School used in the 1990’s version of Beverly Hills 90210.

Visit-able Location #2 is the exterior of the Martini house.

We were please to find out that the Martini house was real and looks exactly the same today.

The physical house can be found on Viro Road in La Cañada Flintridge, California. It’s very cool that street number 4587 is the actual address seen in the movie.

Location #3 is the entrance to Bailey Park. You can find visit this location at the intersection of Viro Road and Lamour in La Cañada Flintridge.