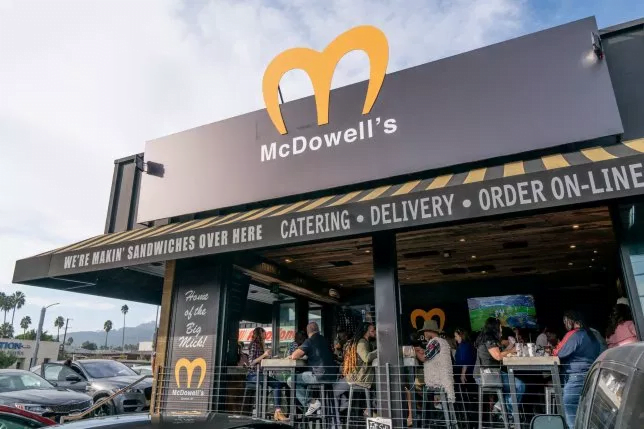 According to Atlanta resident Tucker, Eddie Murphy, Arsenio Hall, and 100’s of crew members were spotted filming at the Rick Ross Mansion. Ross purchased the Mansion that was previously owned by Evander Holyfield, for $5.8 Million back in 2014. It’s located on Evander Holyfield Way in Fayetteville, Georgia.

** Updated November 2020: The Zamunda Kingdom is rumored to be the Rick Ross Mansion located in Atlanta.

Updated October 2020: Many other locations in the Atlanta area including Nick Cannon’s Mansion in Atlanta.

See filming locations for the original Coming to America.

A McDowell’s location was spotted? This was actually a FAT SALS Deli in Hollywood, California. The Fat Sals franchise decided to transform themselves into a Mcdowell’s from the iconic 1988 film, Coming to America, for a Halloween promotional stunt back in 2018. Many people thought this was a filming location for Coming 2 America, but sadly, it was not.

Thanks for all the tips guys!