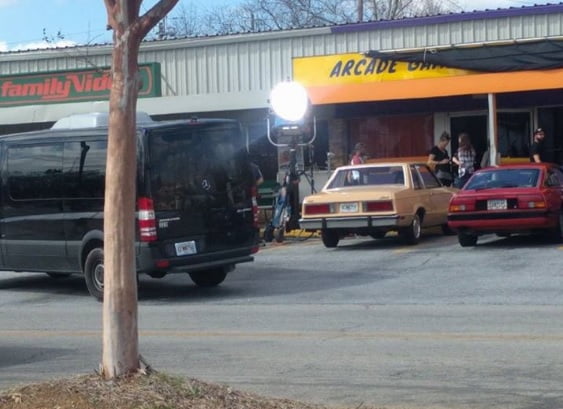 Filming Locations show
Where is the Arcade located?
About:
What about the middle school & high school the characters attend?
Where is this house located
Where is the Police station that’s seen in the series?
Watch Now:

Where is the Arcade located?

You will notice that in the show, the characters visit an Arcade / Video Store. If that store looked familiar, it’s because it is actually the old Douglasville Dry Cleaners located on Church St. in Douglasville, GA. The exact address being 6501 Church St, Douglasville, GA 30134. Thank you “@Harmony__Joy” for the tip!

Stranger Things Season 2 has finally been released on Netflix and we couldn’t be more excited for this show. With it’s mysteries and anecdotal surprises, we wanted to know where some of the show’s best scenes are taken place. Already, you will notice that the scenes done in this show are located all over the country, specifically in states such as Georgia and New York, both located in the USA.

What about the middle school & high school the characters attend?

The middle school & high school used as the filming locations for Stranger Things is actually the located in a small city called Stockbridge, Georgia located at the Patrick Henry High School and utilizing the Stockbridge Middle Schools as well for these scenes. We don’t think the characters are actually attending these schools. Where was this street scene filmed? Thank you “@Lizzie_Boscolo” for the tip!

Where is this house located Where is the Police station that’s seen in the series?

The Police Headquarters is located on Courthouse Square in West Douglasville, Georgia

Television filming taking place in Stockbridge on Wednesday, March 2, 2016. Residents are warned that filming will take place indoors and part of the filming will include simulated gunfire.