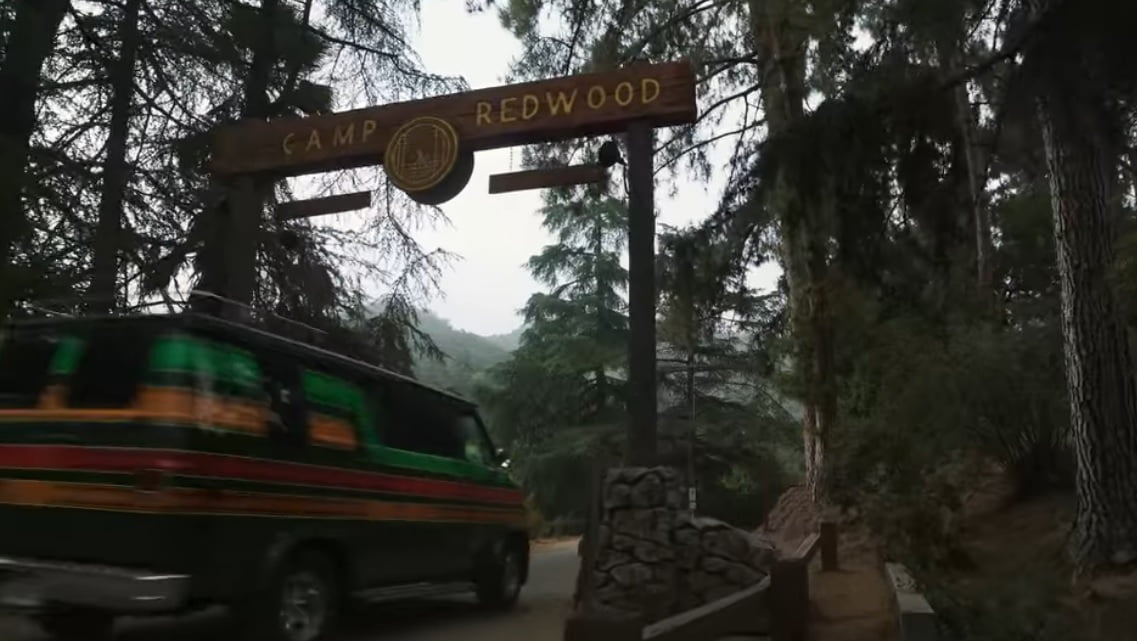 Locations for the 9th season of the hit series American Horror Story can be found all over the Los Angeles area.

Where is Camp Redwood episode 1?

The actual campground site is not real and is not called Camp Redwood. The campground and background scenes were all filmed at Franklin Canyon Park, Mountains Recreation & Conservation Authority. Some prop cabins were built on location and then torn down shortly after filming stopped.

The Camp Redwood Entrance Sign seen below was, unfortunately, just a prop sign set up on the main road into the park.

Below is a pic of the sign shown in the original trailer. Also was just a prop set-up on the main road.

Where was the aerobic workout scenes filmed?

Back in the Summer of 2018, we received a tip that AHS season 9 was secretly filming at the Mid Valley Family YMCA in Van Nuys, California. It turns out this is the location used to film the classic 1980’s workout scenes in episode 1, season 9 due it looking exactly like it did in the 80’s.

Season 9 episode 1 we see Brooke’s Apartment building? Where is this location?

Where is the Mental Institution where Mr Jingles breaks out from?

Location unknown – Got a Tip?

What Roller Skating Ring was seen in the series?

In Glendale, California you can find the The Moonlight Rollerway, This location was used due it’s vintage 1970’s – 80’s vibe.

visit this location at 5110 San Fernando Rd, in Glendale, California

The “where was it filmed” section…

Please help us find these locations below

Thank you, RIB for the tip!

2. Where did Bruce take Brooke and Donna?

Unknown location – Got a Tip?