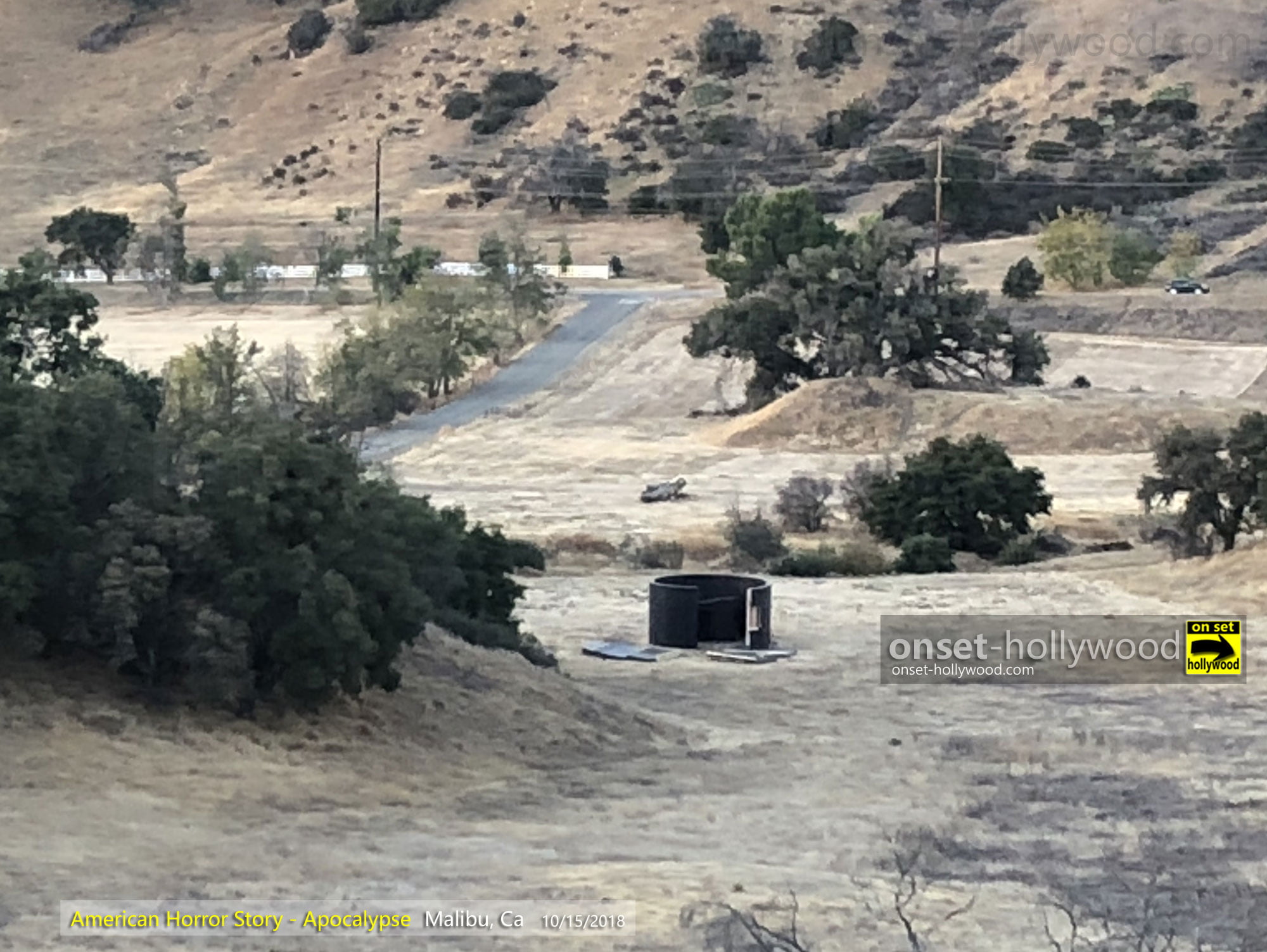 There is nothing quite like the chill that runs down the spines of American Horror Story viewers. Season 8 is no exception, and the show has filmed at some locations that may not appear scary, but have the ability to make one’s skin crawl anyway.

Users Judy & Lia spotted the entrance to the post-apocalyptical bomb shelter in a large field near Mulholland Hwy in Calabasas. The massive set looks to be blown apart in these pictures, but who knows… As of the posting of this update, the episode with the answer has not yet been shown. Any guesses? Leave it in the comment section below. AHS has been spotted filming at the Murder House from season 1. Dylan McDermott was on-set taking pics with fans and signing autographs at this now famous mansion. thank you “Holger M” for the tip & pics!

On the verge of an apocalypse, some of the footage for season 8 of American Horror Story was very publically filmed at the Northridge Mall, in Northridge, California. Filming took place during the day while the shopping center was open for business and mall-goers were not discouraged from watching the filming. This may have been an intentional move by the director in order to add an extra layer of ambiance to the scene.

updated oct 10, 2018. We now know this is where Madison Montgomery works. Thank you to Betty H for the tip.

While filming at the Northridge Mall was brief, the cast and crew reportedly spent four days filming at the Point Dume State Beach in Malibu, California. Many of the scenes shot over the course of those four days included overturned and abandoned vehicles that can only be described as scorched (almost) beyond recognition. At any rate, the reason for the destruction was to create a scene that made it appear as if Los Angeles was the site of a nuclear blast, with the ruined vehicles representing the aftermath. Over the four day filming period one can only assume that unsuspecting passersby thought there really had been. 4 days of filming took place at The Point Dume State Beach located at: Season 8 of American Horror Story kicked off with essentially destroying downtown Los Angeles. In such a high traffic area, passersby observed dead bodies scattered throughout a traffic jam that can only be described as massive. Amongst the wreckage was a blonde Evan Peters ambling around the scene, presumably confusing unsuspecting fans of the show that may have caught a glimpse of him during filming. Though it has yet to be confirmed or denied, it has been reported that even though the filming for season 8 of American Horror Story began in Los Angeles and the surrounding areas, the plan was to finish up filming the season in New Orleans. As the entire eighth season is based on the theme of a post-apocalyptic world, one might question why filming would be moved from one city to the other. This question may be answered when the new season debuts or fans of the show may never know.

Despite rumors that season 8 of the show would be titled Radioactive, it has since been confirmed that the title will be used for the show’s ninth season. That being said, the network is not yet revealing what they plan to refer to season eight as. Fans of the show will have to wait until the season 8 premiere episode in order to find out this tidbit of information. In the meantime, season 8 is shaping up to be one of the best of the series, as indicated by the sights seen at filming locations throughout California.

Check back soon for live set locations and more…