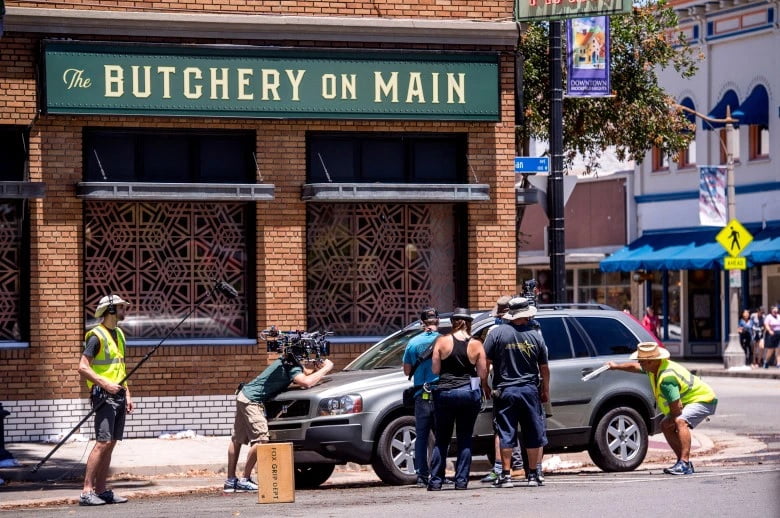 As the era of our new real-life President evolves, American Horror Story: Cult is right on top of it with Season 7. What are the implications of this election? Season 7 will let you know. As of the writing of this article, the season is nearing its end and because of that we would like to now share with you some filming locations of this FX show. The Butchery on Main is actually located in Southern California in a small city called Orange and not the in small-town atmosphere the show portrays Brookfield Heights, Michigan as. Where is Brookfield Heights, Michigan you ask? It’s actually a fictitious city created by the show in order to showcase what one person can do to a small town.

Where is the grocery store seen in episode 1?

The Fields Market in West Hills, California is where Ally is terrorized by a group of clowns. Stop by and visit this real store located at 23221 Saticoy St, West Hills, CA 91304 Fun Film Fact: This is the same location used in The Last Man On Earth season 1

The Butchery On Main

The creepy butchery seen in the series can be found in the small town of Orange Circle located in Orange, California The Butchery On Main is a restaurant in the show that is owned by Ally and her wife. The restaurant is a huge part of Season 7. The Butchery On Main is a fictitious restaurant actually located in Orange, CA.

Is this is a real restaurant?

No! On June 10th, 2017 The Masonic Temple Building was turned into the Butchery for 2 weeks of filming. Thank you “LetYrLiteShine” for the tip and pic!

Thank you “ocregister.com” for the pics! Where does Ally, Ivy, and Oz live?

Ally & Ivy Mayfair-Richards live on a street called Orange Grove located in Hollywood, California. This is the exact same house that Laurie played by (Jamie Lee Curtis) was terrorized by Michael Myers while she baby-sits Tommy in the original Halloween movie. Visit this house at 1530 Orange Grove Ave, Hollywood, CA June 5th, 2017 – Production trucks lined the streets of Sunset Blvd & Orange Grove in Hollywood for the filming of season 7 American Horror Story (#AHS7). Billie Lourd and Ryan Murphy were both spotted on-set as well as Sarah Paulson. Evan Peters was also seen walking around the set with blue hair. Where did Harrison & Meadow Wilton live?

Hollywood! aka “The Chang’s House” is located right across the street from Ally and Ivy’s house located in Hollywood, California. You can visit the house where Harrison and Meadow lived at 1537 N Orange Grove Ave, Hollywood, CA 90046 Fun Film Fact: This is the same house & street used in the original 1978 Halloween Movie

Where is Kai’s compound located?

The house that has been used as Kai’s in the last few episodes of the series is actually a residential set at RSI Locations in Pomona. Visit this location at 3530 Pomona Blvd, Pomona, CA 91769

Thank you “BMW guy” for the tip! Watch What Happens Live with Ryan Murphy as he talks about the 2016 presidential election… watch here on youtube..